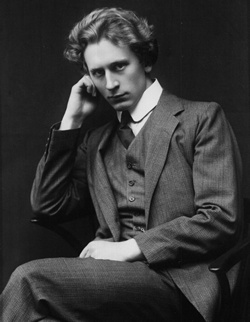 Percy Grainger was born in Australia on July 8th, 1882.  He studied in Frankfurt before beginning a successful career as a concert pianist in England at the turn of the century.  His first compositions were experimental in nature, culminating with Hill Song I in 1902.  He subsequently modified his style in the popular British Folk-Music Settings and the Room-Music Tit- Bits.

In 1914 he sailed for America and took up residence, becoming an American citizen after a period in the US army.  He toured North America, Europe, South Africa and Australia on several occasions, setting up the Grainger Museum in the grounds of Melbourne University during visits to Australia in the 1930’s.

He had a musical mind of unusual breadth and vision, with interests spanning the ages from Mediaeval music to the latest twentieth century developments.  With Dom Anselm Hughes and Arnold Dolmetsch he made modern transcriptions of early music; in later life he devoted his energies to the design and construction of Free Music machines on which a composer could write his music as graphs on transparent sheets to be performed by the machine free of restrictions on rhythm and pitch.

In his own compositions he was mainly a miniaturist, though he composed a number of larger works including The Warriors, Marching Song of Democracy and the two Hill Songs.  During his early career he regarded himself primarily as a choral composer, developing new choral textures in his Kipling settings and folk-music arrangements.  In later life he composed and arranged many works for wind band, including his masterpiece, the Lincolnshire Posy, based mainly on his meticulous notations of folksongs taken down in the first decade of the twentieth century using an Edison phonograph.  Grainger was the first collector in England to make extensive recordings of folksong. In the 1920’s he made further recordings in Denmark which gave rise to his Danish Folk-Music Suite and other Danish folk-music settings.

He studied the Grieg Piano Concerto with the composer in 1907 and published the definitive annotated edition containing Grieg’s explicit directions.  For his piano recitals he transcribed his favourite melodies from a wide variety of composers including Dowland, Bach, Tchaikovsky, Delius, Fauré and Strauss.  He worked unceasingly to promote the music by his contemporaries , especially Cyril Scott, Delius and Grieg.

Of Grainger’s own music, the Norwegian Spaare Olsen wrote:

He masters the whole scale of human feeling - the soft, the tender, the lyrical, the intense, the dramatic, the wild.

Artistic verdicts on a composer like Percy Aldridge Grainger can only be passed when all known facts have been considered without prejudice, an axiom which condemned Grainger himself to misunderstanding in his lifetime and has postponed an accurate appraisal of his contribution to modern music until the recent past.  Virtuoso pianist, folksong collector and arranger, composer of salon tit-bits and experimental free music, musical theorist and musical pragmatist, he suffered from a surfeit of talent that in his lifetime obscured his virtues, not least the supreme virtue of never being dull.  Unwilling to listen with unbiased ears, his contemporaries mistook his vitality for clowning.   Following his death in 1961, it was this version of events that was accepted by many of the avant-garde, who at a time of Cage, world music and a general damning of tradition, should quite rightly have known otherwise.

Today, with our century’s history all but written, we can see that Grainger was a man born out of his time, though which time may have been more suited to his talents remains an open question.  A composer not of evolving technique and sensibility but of parallel interests pursued in a more or less arbitrary fashion, he left a diverse output which reflects his enthusiasms in its extraordinary internal chronologies and tireless revision of the same basic ideas.  Like his late flowering interest in synthetic sound-scores, or “free music”, the context of his work sounds prescient of recent cultural developments, yet also reflects his extraordinary honesty and consistency of purpose that even in his student days had inspired his quest for a natural democracy of musical sound.  Critics could describe this rapport with his surroundings and his ability to divorce expressive ends from their familiar means as in essence post modernist, a formula that admits every factor into the equation except the single one, personality, that Grainger possessed in abundance.

His life began in Brighton, Melbourne, in 1882 - not in itself a fact auspicious of great originality, but combined with the dominant influence of his mother, Rose, a distinctive symbol of the unorthodox creative spirit that ruled his life.  A child prodigy, he came to Europe in 1895 and studied at Frankfurt's Hoch Conservatoire for four years, absorbing Teutonic culture but not much liking it.  Then, in 1901, Percy and his mother moved on to London, where his fame as a concert pianist and composer rapidly increased.  Schott published his music from 1911, at which time his reputation was consolidated by the inclusion of his music in concerts at London's Queen's Hall and Aeolian Hall. Doubtless his fame would have resounded even further but for the intervention of fate, which in September 1914 caused mother and son to journey to America just a month after the outbreak of the First World War.

In a sense, much of the essence of Grainger’s achievement can be traced to these Edwardian years. Though the last four decades of his life encompassed many unusual incidents - his service as a US bandsman, his marriage to the poet Ella Viola Strom at the Hollywood Bowl and his foundation of the Grainger Museum at Melbourne University - all his characteristic enthusiasms were asserted most fruitfully during this earlier period.   A major influence was folk song, of which he collected over 500 examples to form the basis of his British Folk Music Settings including Country Gardens, Molly on the Shore and Shepherd’s Hey!  So popular have many of these pieces become that his brilliantly original way with the tunes has often been overlooked: the almost Ivesian drift of chords, for example, in the Irish Tune from County Derry, or the thrillingly cumulative energy of Bold William Taylor.   An unacknowledged master of the choral idiom, Grainger was not less skilful in creating orchestral versions of the songs, whether in the Lincolnshire Posy for wind band, or the haunting Danish Folk Music Suite, reflecting his lifelong interest in Scandinavian culture.

Many of these pieces were “dished up” for ensembles as diverse as wind quintet and piano duet, a practice which Grainger followed all his life, and which, with the often extensive period between a work's conception and completion, renders opus numbers invalid as a register of his output.  His own division of the oeuvre into the general categories of Kipling Settings, Room Music Tit-Bits like Mock Morris and the In a Nutshell Suite, Sentimentals like the Colonial Song and Sea Chanty Settings such as Shallow Brown, seems on first impression to reflect his odd penchant for inventing down-to-earth musical terms, endearing or infuriating according to taste.  Yet even here there is much sense in the humorous tone, a typically frank self-understanding of his work and an unusual candour of expression that paid little regard to diplomacy or convention.

Yet another aspect of this honesty, Grainger’s celebrated candour about aspects of his domestic life, would in itself today be the foundation of a successful celebrity career.  His imperishable legacy resides in the music, however, which in turn enshrines the memory of a sensitive and truly inventive intelligence.  His genius may well have found any age inimical to its unusual gifts. And yet in any epoch the vigour and freshness of a work such as The Warriors would rightly be regarded as displaying the essence of great musical art.  Widely regarded as his masterpiece, this orchestral fantasia on a programme of Grainger’s own devising enshrines his idea of “democratic polyphony” for a range of exotic instruments and music as a source of wholesome, positive energy.  Within the repertoire its status remains as unique as that of Grainger himself.  And in our present age of nine-day wonders and flexible agendas, its steadfast unity of purpose makes it a shining example of how one man pursued his own lifelong vision of artistic truth without compromising his integrity or the role of music as a true reflection of the self.

Alphabetical List of Grainger’s arrangements of other composers’ music -

ArkivMusic.com - an alphabetical listing of Grainger’s compositions giving the number of CD albums they are available on.

English Composers and the Military Band

Selection of texts set to music by Percy Aldridge Grainger